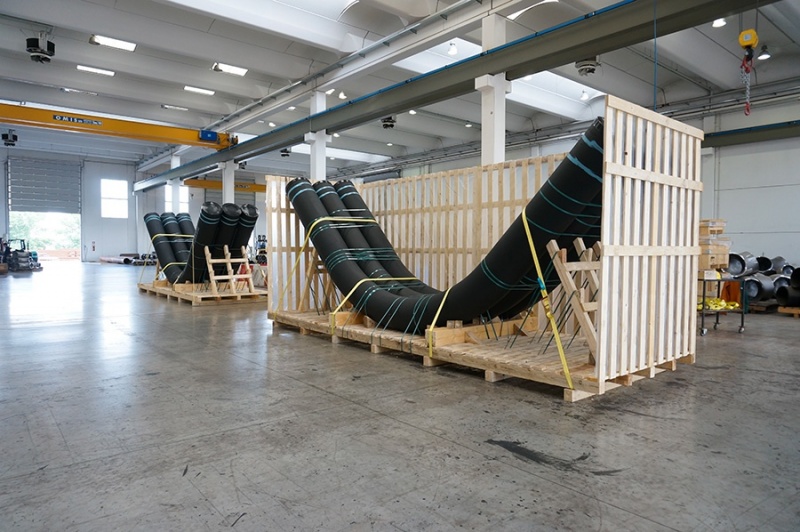 It has created an industrial hub in Carbonara Scrivia, Alessandria, Italy, with a total area of 50,000 sqm., and has transferred there all the equipment from the former area of Genoa.

The quality management system runs the full manufacturing process, from the entrance of the pipes to the delivery of the finished bends, and allows constant updating and traceability.

Pietro Francesconi and Greta Alberici speakers in a session of the Inspection Academy at the Framatome headquarters in Saint Marcel, France

Tectubi Raccordi: ready to compete in the global market

Purchase of land for the Tectubi Raccordi China plants

Allied: August holidays halved due to the risk of gas rationing

Valter Alberici chosen by the President of the Republic Mattarella among the 25 Italian "Cavalieri del Lavoro" (Knights of Labor) for the year 2022.

Mattarella's choices: Valter Alberici among the 25 new Knights for services to work

BSL and its 67 employees continue with Allied

Mandelli’s lucky debut at EMO « Orders already received, plus interest in the brand »

Interview of the President of Allied Group by the Libertà
"Let’s all row in the same direction, businesses and unions, to save the world of work"

Allied International completes the acquisition of Bassi and Simas: the consulting firms

Interview to Valter Alberici, manager of the year

Working so that energy may cross the world. Advertisement for the special supplement "Piacenza Soccer"

"This year will be difficult, but nothing to be frightened of" Alberici (Allied): orders until after the summer.

About the Christmas Dinner of Allied Group.
Human capitalism. If a dinner is worth a thousand economists

Allied Christmas Dinner raises 6000 euros in aid of Progetto Vita.
President Alberici: we are fighting the downturn to protect jobs and our market share

School and work. Very successful results of the "Adopt a class" project, in which Tectubi Raccordi and Allied International have taken part

Working so that energy may cross the world - Advertising page

Allied Group, 93 % of revenue from abroad but Italy reaps benefit of new jobs

Thanks to Allied International support Pouring with rain but all sold out for the National Singers team The Heart wins in Nibbiano.

Websites of the Group